Have you ever tried to enter the city from any one of the tunnels connecting New York and New Jersey during the morning rush hour? Talk about bottlenecking.

That’s sort of how dating feels these days. It’s like for every one girl, there are at least thirty dudes trying to get at her. I’m talking about Pookie from down the way, casual Stefan, Dominican Lou from the Heights, Curious George from the security department, Postal Worker Jake, Fireman Bill, Jerome with the messed up teeth, John James Preston, the successful financier from Park Avenue, that Turtle dude who drives Vince around the block, and the lonely old man who drives the blue Buick with the extra fly velour seat covers [talk about retro]. With so much competition, you have to be extraordinary to set yourself ahead of the pack these days. Bottlenecking is real.

Bottlenecking also makes it much harder to maintain existing relationships. There are just so many options nowadays that people aren’t willing to work out the basic squabbles in a relationship. Some women are like, if you won’t “bow down,” listen to my ninety-nine problems where at least eighty-six of them are completely made up scenarios in my head that I’m stressing about for absolutely no logical reason [gotta love Instagram memes], and endure hours of shopping for the perfect bra because according to two random dudes on the street and a sales associate at Victoria’s Secret, you have freakishly-large boobs for someone with such a skinny frame, then I have twenty-nine other dudes who are willing to follow suit. Some dudes are like, if you won’t sprinkle baby powder on my pinky toes when I get out of the shower every morning, shave nonexistent baby hair off my gluteus maximus at least every other week, endure at least 15 and a half NFL games every year with me and 30 of my closest friends at our house while preparing 300 chicken wings with at least ten accompanying dipping sauces, and rub my calf muscles after I’ve injured myself while channeling my inner LBJ trying to crash the boards during a pickup game in the neighborhood park on a Saturday morning [talk about catering to your man], then I’ve got a slew of other women willing to get with the program. Bottlenecking is definitely a problem [Jim Jones voice].

Bottlenecking leads to unnecessary pickiness in dating. So, stop bottlenecking! Don’t wait on long lines to find love with the same couple of folks that everyone is trying to get with. What do you think this is the Capital Beltway in DC? This is New York, there are many avenues to the same destination. Ya dig! 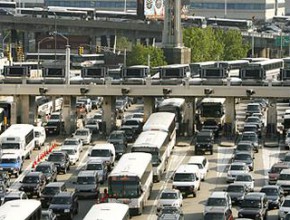